The metal cross is affixed above the hospital president’s door, and it’s not just a decoration.

The crucifix symbolizes the religious well-being of patients. In addition to them being cared for by medical doctors and nurses at UPMC Mercy, they receive a level of care not measured in a prescription pill or through a needed operation.

It’s more of a spiritual healing.

“That crucifix over my door is there for a reason,” said UPMC Mercy Hospital President John Innocenti, as he looked at it from his seat inside his office. “We have morning prayer and reflection. Our focus is on exceptional patient care, which has always been UPMC Mercy’s mission.”

That faith-based mission has continued for 175 years.

The Pittsburgh Uptown health care facility was founded on the prayers and beliefs of the Sisters of Mercy, a religious congregation founded in Ireland in 1831 by Catherine McAuley. The nuns brought their concern for others to Pittsburgh in 1843. 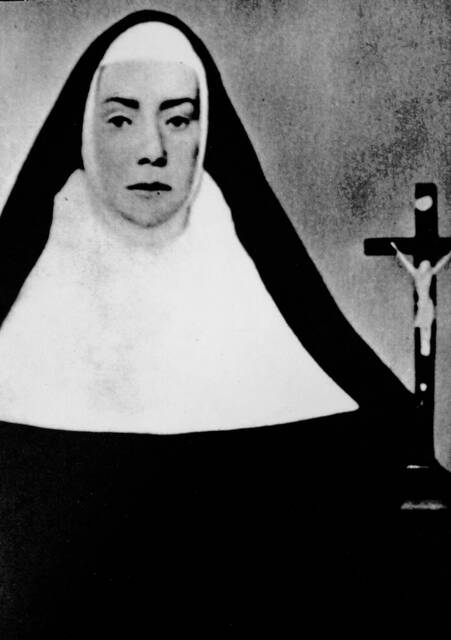 Mother Frances Warde led six other sisters to the U.S., where they founded the first congregation of the Sisters of Mercy.

Mother Frances Warde led six sisters to the U.S. The “Seven Sisters” founded the first congregation of the Sisters of Mercy in the U.S., according to the hospital. Mercy Hospital opened Jan. 1, 1847.

It was founded as a health care facility that welcomes everyone. Mercy established the region’s first teaching hospital with resident physicians in training in 1848.

The hospital was incorporated in 1882. A board was established and Thomas M. Carnegie was elected board president.

Dressed in floor-length habits, these holy women roamed the floors and entered patients’ rooms with a mission of another layer of patient care — one that can’t be quantified. But it’s one that has continued throughout the hospital’s longevity.

UPMC Mercy is the only Catholic hospital in the UPMC system, which took over Mercy hospital in 2008.

You won’t see the long white habits as the remaining nuns dress in regular clothing, but you will see the same caring nurturers, said Innocenti, who has worked in health care for five decades. He said the religious hospital has survived this long because of the dedication from the sisters who created the foundation.

Schallenberger said the change in attire came from when the Vatican Council of the 1960s addressed the need for the Catholic Church to assess current practices and their relevance to the times.

“The former habit was not simple by the 20th century standards,” Schallenberger said. “It was within the style of Ireland in the 1830s. Jesus was among the people as a person without a specific garb … so we had the option of change. Some of us took longer than others, and some continue with modified tradition.”

At one time, there were 40 sisters. There currently are three: Sister Carolyn Schallenberger, Sister Placidus McDonald and Sister Sandra Pelusi. 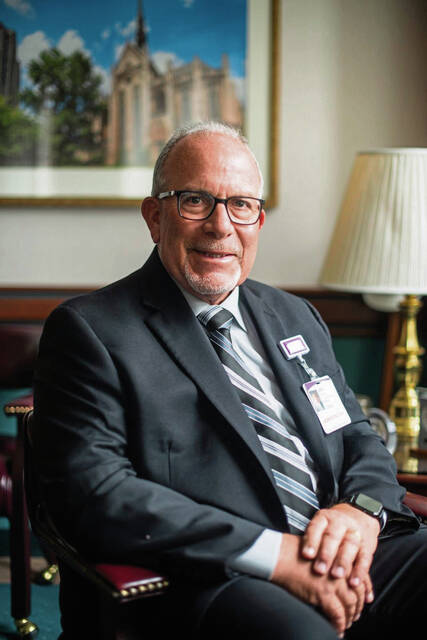 Every morning, more than 100 people join a 15-minute video call that Innocenti refers to as a “huddle.” They go through every department to give everyone an understanding of what the day’s activities need to be.

The hospital is licensed for 400 beds, though occupancy runs close to 300.

Innocenti said one reason the hospital has continued to flourish is its proximity to Downtown Pittsburgh. UPMC Mercy is the region’s only Level 1 trauma center and a burn center under one roof. It is one of the busiest emergency departments in Western Pennsylvania, and it has a comprehensive stroke center.

There will be a Mass at St. Paul Cathedral in Oakland in the fall, celebrated by Bishop David Zubik, who has been a patient there.

Zubik said via email that for almost the entire existence of the Catholic Diocese of Pittsburgh, Mercy Hospital has been a very close cousin, reflecting the mission of the church in both reaching out, especially to the economically challenged, and preserving strong Catholic ethical principles in the field of medicine.

“That firm foundation was set by the dedicated Sisters of Mercy,” Zubik said. “It was my privilege to be part of a team in 2007 that affected the transition of UPMC’s ownership of the hospital while maintaining its Catholic identity. In my eyes and in my heart, Mercy is numero uno.”

The hospital hosts cookouts for the staff on holidays, such as Memorial Day on Monday. It’s cookie day on Wednesdays. He said the employees devote a lot of time to their professions, and he wants their input about how to make things better.

Sister Carolyn Schallenberger is seen in a photo alongside her predecessor, Sister Margaret Mary Laitta, left, collected in the historical displays in the hallway at UPMC Mercy.

Innocenti does rounds throughout the hospital to see what is going on. On those trips, he often sees one of the longest-serving employees, Sister Carolyn Schallenberger, a native of Jacob’s Creek. She is easy to spot on her electric scooter decorated for the time of year.

She began her career in 1959, after joining the Sisters of Mercy and earning her nursing degree. As an employee of more than 60 years, she said she hears from people every day that UPMC Mercy isn’t like other hospitals.

A broken back can’t keep her from her passion, which is why she rides on a scooter (she suffered a compression fracture from a nonwork-related fall). She helps with new support personnel hires.

“Hospitality is the key word,” Schallenberger said. “I want everyone to feel welcome here. This hospital is different and it should be because the Lord walks the halls with us every day.”

She works part time as a new hire support coordinator. Being at the hospital keeps her young, she said. Schallenberger has a basket on the front of her scooter filled with candy.

“It’s about keeping the spirit light and trying to put smiles on peoples’ faces,” she said. “We are all part of the mission here. I don’t dwell on the negative. I am a positive person. I welcome everyone who comes through that door.”

When she began her career, there were no recovery rooms. Patients came directly to their rooms after surgery.

“That was a drastic change when they added recovery rooms,” she said. “There have been so many technological advancements. Nurses charted by hand in my day.”

Back in those days, the Sisters of Mercy served patients through World War I, the epidemic of Spanish influenza, the Great Depression and World War II. They can now add a pandemic to that list.

In 1931, at a time when one day in the hospital cost less than $4, Mercy Hospital donated more than $600,000 worth of health care services. In the 1960s, it decided to rebuild and remain in its current location, according to the hospital.

Over the next four decades, the hospital expanded, replaced facilities and developed specialized programs and advanced technology. 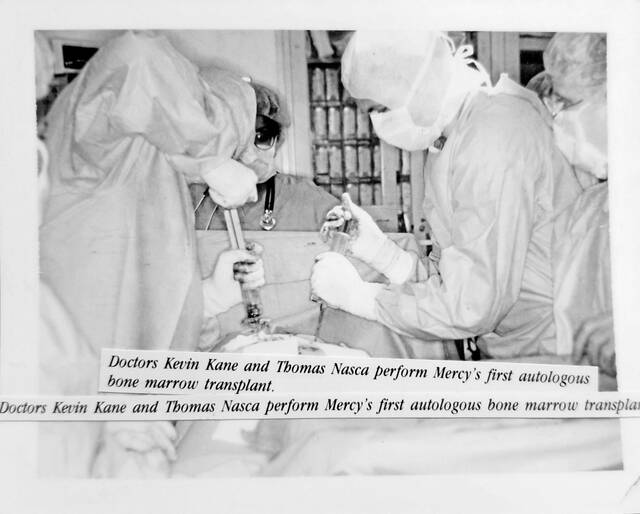 A bone marrow transplant at UPMC Mercy in 1990.

The hospital has continued to evolve its care.

The UPMC Mercy Pavilion is currently being built.

It will offer care for people who need physical therapy and rehabilitation or have vision impairments or diseases of the eye.

It will have cutting-edge technology and be accessible for all. There will be eight eye disease operating rooms, 81 exam rooms, 10 rehabilitation exam rooms, 87,000 square feet of research space and a rooftop terrace garden. The building will be 410,000 square feet and nine stories. The cost of the project is $500 million.

It is being designed for people with limited mobility and vision impairment, and patients will learn life skills to help them live more independently.

It will change this level of care, Innocenti said. 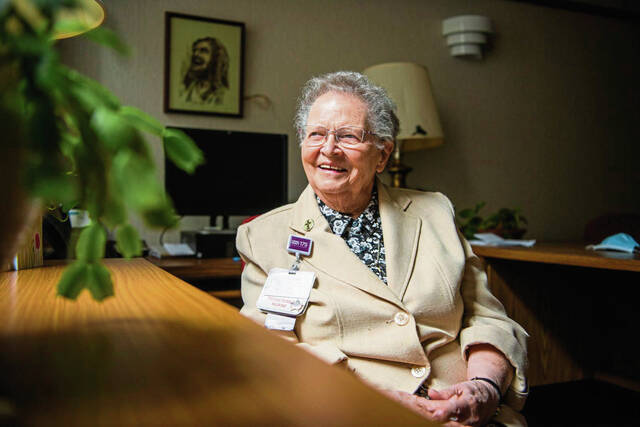 Sister Carolyn Schallenberger remains one of the longest serving employees at the hospital, since she began in 1959.

One thing that will never change is the hospital’s commitment to faith, said Schallenberger, who has a picture of Jesus laughing on her office wall.

“I will work as long as I am able to do it and have my mind,” she said. “I tell people I retire every night. The Lord will tell me when it’s time to leave. We still have work to do, and it’s about values and being a positive influence. It’s about making people feel comfortable. I love my job. We still follow the same beliefs that she did all those years ago. God’s work is never done.”

No, it’s not, Innocenti said, adding they follow the Catholic doctrine here as he glanced up at the cross above his doorway.

JoAnne Klimovich Harrop is a Tribune-Review staff writer. You can contact JoAnne at 724-853-5062, [email protected] or via Twitter .

What is skin cycling? Learn more about the TikTok skin care trend